Every second and fourth Thursday at the Lahaina Farmers Market, farmers, artisans, bakers, and culinary entrepreneurs set up their wares beneath a sprawling monkeypod tree on their waterfront grounds at the Lahaina Jodo Mission. This late afternoon market offers a pleasant alternative to Maui’s numerous morning markets. Market goers relax into the evening soiree feeling of the event: indulging in a jun “the champagne of kombucha” ice cream float or taking a seat at a picnic table near the musician’s stage to enjoy a hot bowl of Alohana’s vegan ramen as the sun sets.

“I wanted to do an evening market because I am a mom,” explains Yayoi Hara, the market manager. “Trying to run to the farmers market after I drop the kids off, between work and whatnot was just chaotic. I thought it would be nice to have an evening market where you can bring the kids, grab some food, and be on the beach and watch the sunset. And at the same time really bring the community together, because I think that’s one thing West Maui is kind of lacking is a real sense of community,” she said.

The desired effect seems to be working: kids run to and fro, locals and tourists strike up conversations with vendors and one another, families enjoy enticing Israeli food by Hamsa and Hawaiian chili pepper and fruit elixirs from Haleakala Supah Shots. This week Supah Shots owner Tina juiced her backyard Kula apples to make fresh apple juice to sell alongside her usual lilikoi, pineapple and Thai basil, and Kula strawberry shots.

Yayoi says the initial impetus for the market was the desire to play a part in the much needed diversification of Maui’s economy. In 2020, as many tourism-oriented businesses were closing their doors and unemployment rates soared, and the Launiupoko market was put on hold, she used her ties with the mission (her father is the minister) and started the market that August. “The response was overwhelming,” she says, “this was post-lockdown and people were ready to come out and reconnect.”

The market lost some vendors when hotels reopened, but many stayed on, some of whom were beginner backyard farmers or newly minted entrepreneurs who opted not to go back to their hotel or service industry job.

Vendor, Neide Kirkegaard from Lahaina, sells a version of Furikake that she invented using Hawaiʻi kukui and macadamia nuts and a blend of other nuts and seeds and spices. “I wanted my kids to eat quinoa and I was losing the battle,” she says, “I had to think of something that would make them want to eat it.” After that initial success, friends including Yayoi encouraged her to bring it to the market, where her Da Nutz Furious-kake seasoning met another round of positive reception.

On most market days, between 15 and 25 vendors set up on the Buddhist temple grounds. A handful of them are farmers and most of the others are food-oriented. Yayoi says she’d like to see the market grow, and would especially like to attract more farmers from different parts of the island to further diversify the produce selection.

Kula farmer Kenneth Okamura, who sells his organic produce at four markets on island, says he makes the trek because he enjoys the setting of the Lahaina Farmers Market, the friendly patrons, and the $2 andagi (Okinawan doughnuts) that a fellow vendor brings each week. “The people who come to the market, they seem to really appreciate fresh, local produce,” he says.

The Young family splits their time between Lahaina and Keanae, where they farm kalo, bananas, coconuts, ulu, lilikoi and other canoe plants that they sell at the market. Joe and Terry Young retired 12 years ago and returned to farming as a family endeavor. Their kids, who now have their own kids, work on the farm now and then and help them prepare steamed kalo leaves and ulu pasteles that they freeze to sell at the market. Aside from supplying a select few restaurants in Lahaina including Choice Health Bar and Moku Roots, the Jodo market is the only market the Youngs partake in. “This market is really personal,” says Joe.

A fisherman brings akule some weeks. The Traveling Plum sells their craft local fruit crack seed or li hing mui creations and Naomi and Patrick of Guth Farms in nearby Kahoma sell homemade poi and kululo, and fresh sugarcane juice. The natural body scrubs by Maui Sugar Babe are made with live enzymes extracted from fruit from their Waiheʻe farm. A seamstress named Machiko does pant hemming at the market and sells sewn goods, and wellness practitioner Kayo Malik offers community acupuncture.

Being at a Buddhist temple has allowed the Lahaina Farmers Market to run as a truly community driven market. Vendors set up free of charge, Yayoi only asks that they tip the band, two friends of hers who play for free. As the market came to a close, vendors put some cash in the tip box and stacked fresh pita bread, homemade jam, avocados, and other goods at the edge of the stage. The duo, who jokingly call themselves “Kupuna Band” or “Lahaina Farmers Market Homestead Band,” play guitar and sing local jams until the sun dips below the horizon.

Early on, Yayoi teamed up with Lahaina cacao farm Maui Kuʻia Estate to distribute grant funds for Maui residents to buy local food. Thousands of dollars in vouchers were given to school teachers to spend at the market, and then to first responders with the next round of funding. Yayoi is now waiting on approval from USDA to process EBT cards so that low income residents are able to use their SNAP benefits to buy food at the market.

Yayoi is looking for ways to incorporate an education aspect to the market; perhaps farmers doing a worm composting demo for kids, or giving small group talks on sustainable farming techniques, but Maui farmers are a busy demographic these days, so that remains in the works for now, but look out for it in the future! 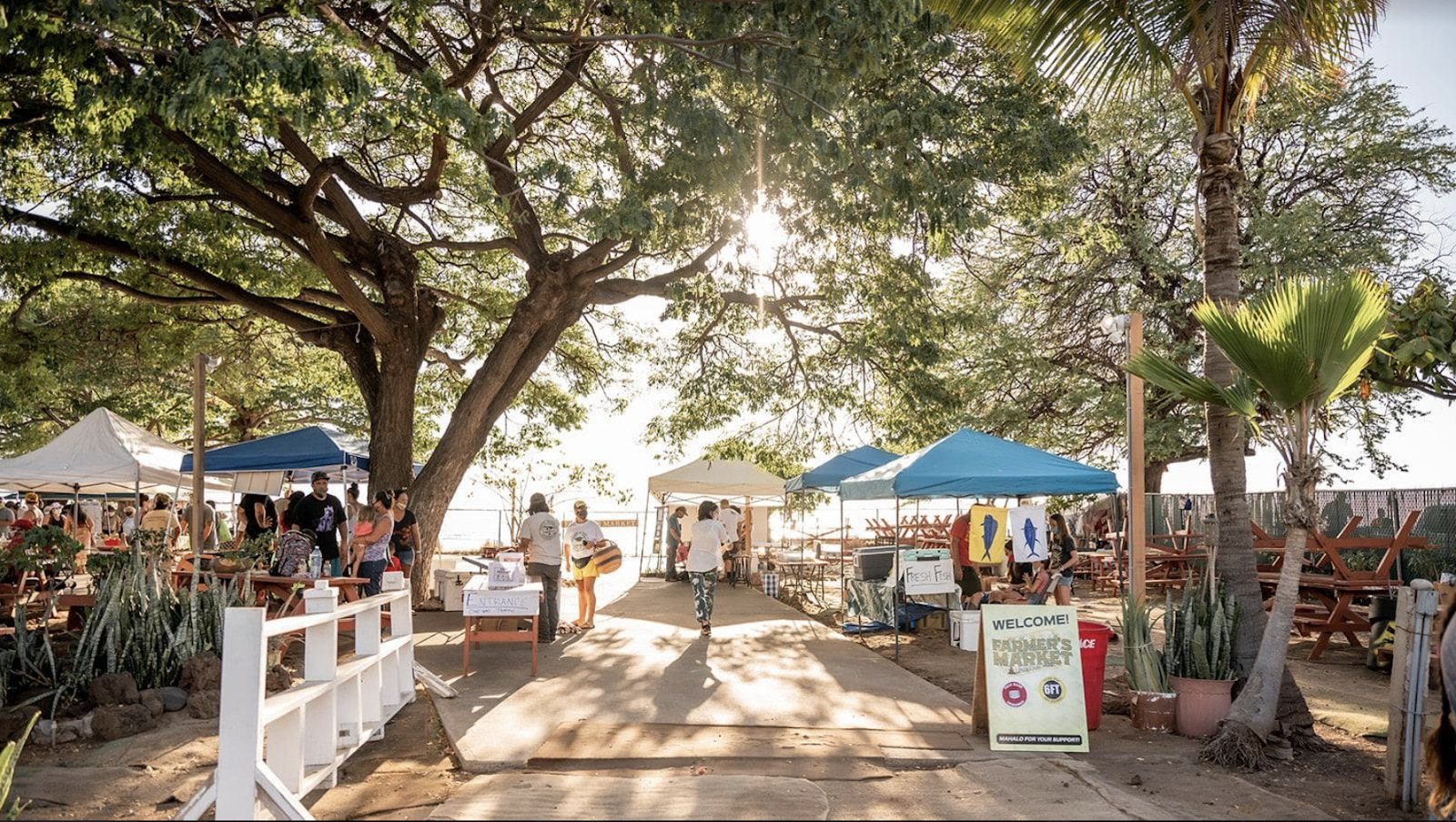 Want your farmers market highlighted on our blog?